Gosh, it has been awhile since I have been able to sit down and write out some fishing blogs so pardon my absence. This was a great trip! Lots of images (TIP: click on image to view full size and click again to advance to next image) and less reading is my goal but you have to fill in the gaps somewhat... either way enjoy!


About a year ago another intriguing fly fishing adventure opportunity presented itself, this time from my dear friend and fellow guide Josh Gallivan. Josh is a passionate and very talented angler, guide, photographer and world traveler who has been skirting the globe the last few off seasons accomplishing more in the last 10 years than many could hope to do in a lifetime, myself included. So when I got this email addressed to a handful of my favorite carp mates it caught my interest and in a flash I found myself saying yes to another far off saltwater destination... this time to
French Polynesia! 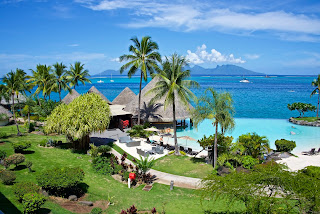 I really signed on without much thought besides costs and timing... early December 2018- a couple months after guide season and just as ski season was getting under way, perfect I thought!
Traveling to Tahiti was actually quite smooth and reasonable, easy in fact when compared to the Indian Ocean.

We were to rendezvous with our friends Jeff Currier and Tim Bruun in Papete. Josh and I were traveling alone but picked up our good friends Turner Ressor and Matt Heumann in SFO (Matt was coming all the way from Cairo where he works in the oil industry) for the final leg. This was our crew, a nice blend of fish heads, some famous and some not so much, but all good sticks and capable of a real good time!

This trip was a great opportunity for us all to experience someplace new and fresh which is saying a lot when both Jeff Currier and Tim Bruun are included. In fact they were both returning from other exotic locations and were looking forward to some laid back island angling, so we thought.
We celebrated hard that first day in Tahiti hitting a few bars and touring some sight on the edge of town. The place is beautiful and its people were quite nice, off to a great start. 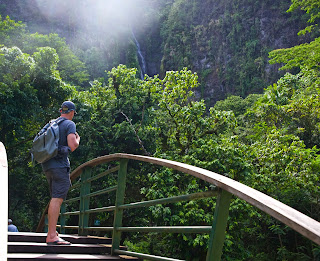 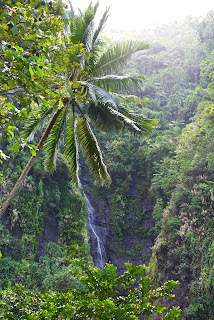 As expected we were a bit hungover for our connection to the outer islands called the Tuamotus. These islands live off the grid from the everyday world but had nearly all the necessities of modern life. I knew then I was going to enjoy this place, going back in time where cell phones, tv's and cars were not found. 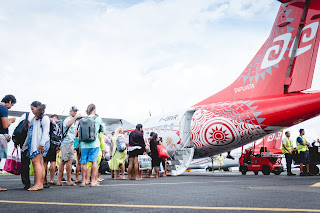 After a couple stops and tantalizing views of the atolls we made it to Anaa. This atoll was a bit more unique than the others. It's lagoon was vast with areas of deep water and large areas of gorgeous sand flats. The island is more elongated and has several zones where the Pacific Ocean could flush out the lagoon and bring nutrients to the shallows. 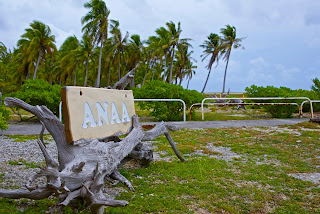 We were welcomed in classic Polynesian style and the warm people immediately caught your attention. We were their guests and they wanted to be sure we were welcomed well. The fly fishing ventures to this area are somewhat new and still infrequent, therefore when outsiders come to visit they role out the red carpet. 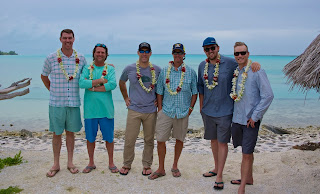 We quickly settled into our cabanas for the week and without skipping a beat we did what we do best, drank beer (Hinano) and talked about fly fishing around the world on a remote island in the South Pacific, life was indeed good.
Day 1 brought in some storms and silently we all felt the concern, did we bring the monsoon with us?   We spilt into pairs and hopped onto a vessel to venture out into the darkness on the horizon.
It actually rained buckets for hours on the flats that day but the fish didn't care at all. Visually seeing the fish was tough and bonefishing efforts were not rewarded but we were all quickly introduced to Anaa's reef and our excitement came alive.


After the weather settled down and we had two days of checking out the island we were quickly putting together a plan of attack for the remainder of the week. For whatever reason the bonefish were few and far between on the lagoon side flats, yet it was worth looking in the morning stillness. Some of the bones we did see were good size and reports said an 11 pounder was caught a couple months prior. Jeff and Tim were on the hunt for Napoleons so the reef was their preference. They did manage to talk the guides into going outside the reef and dredging from the boats. After two days of sharks eating their fish or giants breaking off in coral and rock they decided perhaps by foot was better, besides they had lost all their heavy jig flies and couldn't get to the bottom as easily. So the plan was emerging for most of us... a morning look at a couple bonefish flats then hitting the reef before lunch and through the afternoon. The weather was stable and hot. The seas were calm and at low tide you could sight fish off the reef edge, it was setting up perfectly.

After 3 solid days of good but challenging and adventurous fishing we were hitting our stride and had plans developing... re-visit flats and reef areas where we had seen our target species in good numbers. It was breaking down essentially into a reef trip since the big bonefish were not around. I stayed focused on the bones and it was tough but man, were these the most beautiful flats I have ever seen. When you did spot bonefish they were often singled up and extremely hard to see against the white bottom and ultra clear water of the lagoon. The guides were saying and as we later learned (read more about this on Josh Gallivan's blog as he returned in February 2019) the locals do eat the bonefish, locally called Koi Koi and they become spooked off the flats from traps and other means of harvest (Bonefish are eaten because the reef fish have ciguatera poison) . They are now being protected the months of Feb, March and April for their spawn also known as the Rahui and much research has been done here through the efforts of IndiFly and FlyOdessey. I applaud their work here and suggest you check out their projects.
I did mange to hook about 6 bonefish all week but only landed two. I had noticed any flat with rock or coral along its edges would show bones but it was nearly impossible to land them due to break offs and then there are also lots of sharks as well. Yet, with all that said I'll stay optimistic about the future of Anaa's bonefish and will return without hesitation to walk the Church Flat, the most mesmerizing and gorgeous flat I've witnessed. 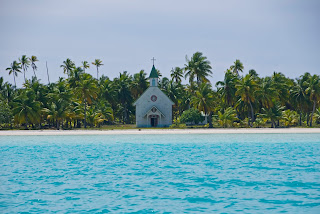 The reef was center stage after dinner on our 4th day and we all had Napoleon fever. In addition, it was remarkable how many new species we were all racking up, even Jeff got a few fish that he had never seen. The reef scene was rugged and you better have had a big breakfast and carry a lot of water. It was hot, over 90 daily and not much of a breeze which helped keep the swell down.
We all walked the reef top which was broken down coral from ages of heavy surf, it was almost like a crunchy sidewalk allowing us to peer into the drop offs and slots where the game fish were hiding.  The best approach was to cast a 12 weight with a floating line, about 7-8' leader of 80-100lb test and a brush fly. Fly choice didn't seem to matter too much when you found an eager fish but when they didn't want it they gave you the finger hard. On stand by we carried a 9 weight with a crab for triggers or other oddities swimming by. Most days we were battling it out with bohar and other snappers, bluefin trevally and a few Napoleons. We did see a few big GT's here and there but the shots were not setting up well and none were hooked. Sharks were nearly everywhere, mostly blacktip reef sharks but a few lemons and oceanic whitetips as well, the island's guardian. 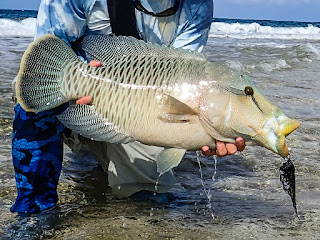 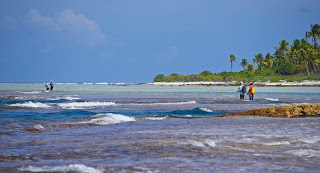 One evening after a day of hard fishing we all grabbed a beer and headed down to the village center where the locals were competing in spear throwing. A couple of our guides were in the competition defending their island title. This year's winner and champion of Anaa would be heading to Tahiti to compete in the national title. The accuracy the guys had was remarkable. The story goes this was a warrior's head from rival islands in past times, now they use coconuts. The spears are marked by owner and the one highest on the coconut was the winner. Amazing to see people living so simply, healthy and happy, the whole village was there. 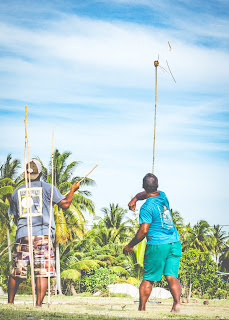 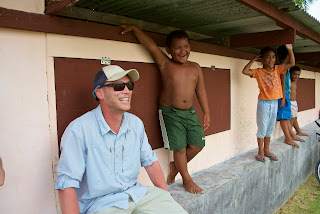 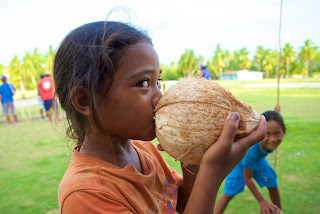 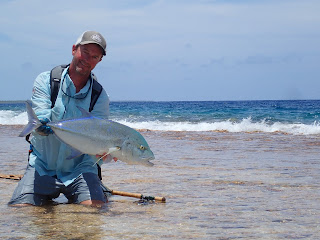 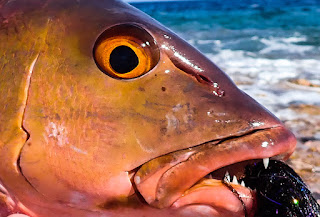 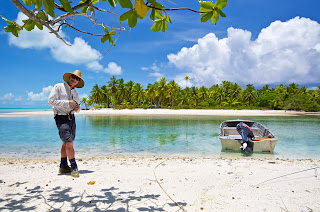 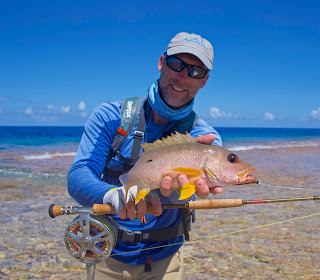 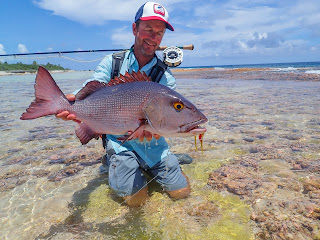 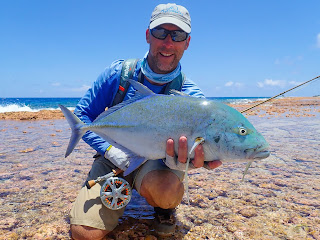 What more can you say about a beautiful remote island with good fishing, nice variety and amazing people than it was a great experience and I will return in the next few years. We all had good fishing and knocked a few new species off the list but this type of fishing is not for the soft intermediate. We worked hard for every fish, getting into position, stumbling in the heat, casting 10-12 weights with big flies, break off's, re-rigging, surf, sharks and when you did have success the power of these creatures is mind blowing. The bohar snapper pictured above will crush you even with top of the line 12 weight gear, these fish mean business and every second of it is a blast! The reef is pretty special here and however we had fair flats fishing for bonefish I know that has tremendous potential.
I cannot say enough about how nice and hard working the lodge and guide staff worked for our group. Joel made us feel at home every night and the food was amazing!
On our last evening they shared local island songs and gave us a quick history of the island's past and their hopes for the future. I wish them well in preserving their culture and creating a sustainable eco tourism and fly fishing industry here so their children can make it a home as well. 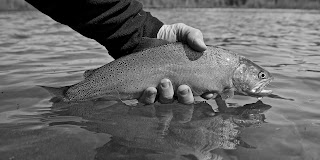