Two years in row we have made Last Chance, ID and Henry's Lake our venue for our annual fall Guides Retreat. This is a chance to unofficially wrap up the season, catch up with friends and life, but more importantly go fishing together and just be ourselves. Put together a comfortable house, lots of silliness, good food, beer and mix in some epic trout water and that is what we think of for the perfect guide retreat.
We typically rent a nice house somewhere, share food and cooking roles (elk, venison and fish tacos) and just go fishing, keep it as simple as possible. After a full day of fishing we have huge meals and gather around to watch the World Series or maybe a football game, tell lots of fishing stories and simply savour the autumn abundance, almost like Thanksgiving! 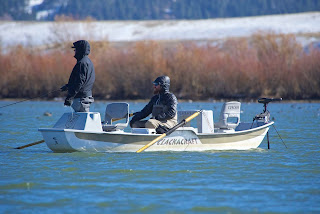 We have about 16 guides on our staff but most years only 8-12 of us can make it due to hunting obligations or family duties. Jeff Currier is the only non guide that is forever invited because our history as a group goes back two decades or more from the Jack Dennis era, in fact Jeff started the whole idea and for many years it was his show. Besides, having Jeff around to tell his recent fishing adventures is always interesting and he is pretty fun to drink a half dozen or more beers with. 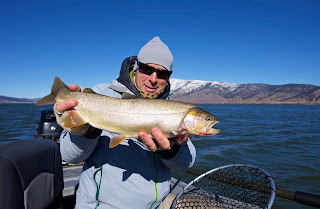 This year was no different and we had assembled a good crew: Scott Smith, Tom Montgomery, Josh Gallivan, Jeff Currier, Trey Sharpe, Ben Brennan, Nick Fiorini, Walt Moore and Luke Philkill. Half of us arrived on a Thursday afternoon. We were able to get the fridge stocked and the boats launched for a couple hours of fishing. The air was chilly and the stiff breeze hit you to the core, buckle up we thought. The fishing was a little slow that first afternoon but we were not too concerned, besides it is not only about the fish. 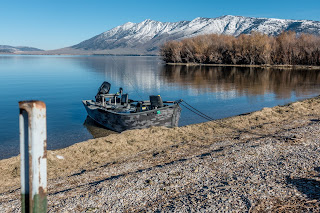 Late that evening the lake laid down and we were all hopeful for a great weekend of fishing but had heard a front was perhaps in the forecast. No worries, we are all ardent anglers and well prepared. Friday we woke to some nice conditions and our hopes were high for that big fish bite to happen and we were fishing mostly out of the State Park area that is known to harbor large beasts in the fall. Our best technique seemed to be flashy minnow streamers, slow retrieved on an intermediate line. The water was much colder than last year, about 39 degrees, this certainly contributed to the slower action.

We managed to get into a few fish but it was nothing like 2018 when we were all landing multiple fish between 5-10 lbs, honest, it was that good.
Josh had the best fish that day, a solid 7-8 lb cutthroat. This gave us confidence for Saturday, our last day.


Another calm evening on Friday erased our worries for a significant front we had heard about. The forecast was for high winds Friday into Saturday but from our view the weather was picture perfect. A little on the cool side (35 degrees) but the late October sun felt warm with the low wind.
We were having a great evening session just a mile or so to the west of the house and State Park. Being on the water with old friends is perhaps the best way to catch up on life because you are relaxed and in the moment, yet that evening the fish were not happy, as if they knew something was coming.
Dinner that night was a feast of elk and venison. We were all lucky individuals to be a part of an exciting industry and had worked hard for the year and relished in our efforts and devotion. Years ago this may have ended with pure drunken debauchery but we had moved past that for the most part and with the boats beached outside we rested up for a solid day of fishing on Saturday.
At about 5am I remember waking to an unusual noise. "Damn, that sounds like a train and thunderous". I rolled over giving it a thought for a couple minutes. "I hope that is not wind", I thought in the back of my mind. It became louder and I knew it did not seem normal, it was sure to be the wind. About that time I realized the boats were beached on the direct north facing shoreline from the house. I jumped up with a dire thought and at the same moment Nick comes into the house with the wind slamming the door and yells, "everyone up the boats are swamped, its bad, grab your waders and head lamps!"
The force of the north wind was incredible and without exaggerating it was in the 40-50 mph range. The lake is about 3 miles long and the fetch was perfect out of the north, creating 3-4' waves that in a matter of 30 min. had swamped and pinned our boats to the beach. To make matters worse the temperature had plummeted to 10 degrees and the waves were beginning to freeze on contact. This was a nightmare most of us had never witnessed.
We brought down two trucks to the waters edge and while other's bailed out the boats we began to draw them straight and pull them up hill away from the freezing shoreline. It was a mess but after a strong effort from everyone the situation was stable and we did not lose the boats. As the sun came up we literally could see the waves and water freezing before us, ice had now formed 100 yards out from the shoreline, it was chaos. 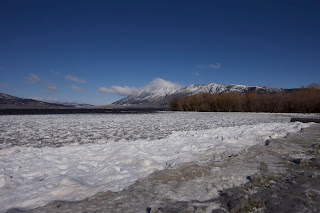 After at least 8 pots of coffee a few guys decided to go fishing. The others chose to watch college football, including me. The wind was still 20-30 sustained and it was very cold. Josh again managed to catch the only fish, even Currier was skunked but Josh did admit it may have been snagged by accident.
We retreated to the house for the remainder of the day, eating, drinking and watching football and a couple hours of Uncut Angling on Youtube. Despite what had happened and combined with poor fishing we were all still stoked to be there!