The report for the past week and the next week is RAIN! Wow, what a much needed wet Spring we are having, who would have thought after such a warm and fairly dry winter. In any case, we are still fishing and some drainages are reporting great action! Here in Jackson Hole the best conditions are found on Jackson and the other lakes along the Tetons. The upper Snake River below Jackson Lake Dam is fishing well with streamers and nymphs but if you are not familiar with this water it can be daunting, much like fishing a lake. Until we see the bugs wake up the trout are quite happy patrolling the deeper runs. Anticipating higher flows on that upper reach in the next week or so as the lake fills.
Jackson Lake has been outstanding! The brown trout fishery there is really coming around, some days you catch more browns than macs and cutthroats combined. In my eyes it is still the best lake trout fishery in the region. Work ledges, points and large flats with moderate depth(8'-15'), our best flies have been minnow jig streamers and large marabou leeches on type IV sinking lines.


Outside our valley the fishing has been very good on the Henry's Fork and decent on the South Fork. The HF is in the middle of salmon fly mania, lots of bugs and anglers but the trout are holding up, brave the crowds and you might have the best day of the year! The SF is in flush mode but past peak and is beginning to drop, currently 15,000cfs. Here try worms and streamers up on flooded grass and quite backwaters... water is cold so slow your retrieve a bit.
Lastly, the Blackfoot Carp Tournament was held last weekend. This year the event is in a transition moving to different organizers and paired with terrible weather the turnout was low but the die hards that showed had a great time camping, fishing and catching up with old guide friends. The following is a quick photo re-cap.
Tight Lines before Summer hits! 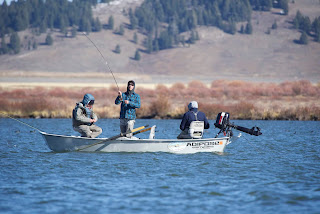